Coming into my training as an Audio Engineer I knew of Digital Audio Workstations (DAWs) but could never utilise them to their full potential and had very little idea of what I could do with one other than record and chop up audio. Thus began my learning experience with new DAWs, beginning with learning the ins and outs of Pro Tools. From there, I have begun to use Ableton Live and have also played around with Logic Pro, as electronic music production has become a vested interest of mine. From the perspective of someone who is not yet a master of each DAW, but has played around extensively with each, I will compare both Ableton Live and Pro Tools and attempt to determine which is better, or at the very least the capabilities of each compared to the other.

Ableton is a very electronic music based DAW and is basically known as the king of DAWs in the EDM world. Its original design largely focused on this genre and live DJ’ing, however, it is not impossible to get some serious other work done in this DAW. It, of course, has the usual basics of most DAWs, a record feature, looped playback functionality, sample sequencing, various audio effects built in (such as EQ, compression, panning as well as various other effects I will talk about shortly). Overall, the capability on a basic level of Ableton is all there! As I stated, Ableton was built with electronic production in mind and therefore, its capabilities in this area are incredible. The ability to manipulate audio and MIDI inside of Ableton is unmatched as far as my experience goes and the effects catered specifically to this area are incredible. An example of this is the Arpeggiator MIDI effect which is simply dragged and dropped onto a MIDI track within the DAW, adjusted as needed and bam, your MIDI track is instantly arpeggiated with your full control. This can then be automated extremely simply from the track area and again, is fully self controlled. This is just one example of an effect present for free within Ableton as there are various others that can be used for both MIDI and Audio tracks. This DAW’s specific features include many ‘convenience’ features including; a drag-and-drop sampler, warp markers, a semi-minimalistic interface and instrument/effect racks. Some other great features include its live functionality, AU/VST plugin functionality at the same time as well as saveable racks as a preset.

Despite its great functionality as a DAW tailored to electronic production and live sound, Ableton does have various downfalls. As an Ableton user, you are very tied to the beats/bars pattern. Snap-to-grid is default to maintain tempo and can be turned off, however the user is then left at a disadvantage. This isn’t exactly a bad thing, as keeping to a global tempo is extremely easy because of this feature, however, fixing out of time audio and overall moving audio in very small increments is a lot harder in this DAW. Another downfall of Ableton is its price. For a DAW that offers very similar things to that of Logic, it is very expensive. The only real extras you get out of Ableton are its easily manipulated and well-integrated live music aspects, however the steep price on the suite version is enough to deter many users who are happy to settle on a DAW like logic, or even Pro Tools, which has largely moved to a subscription based format. 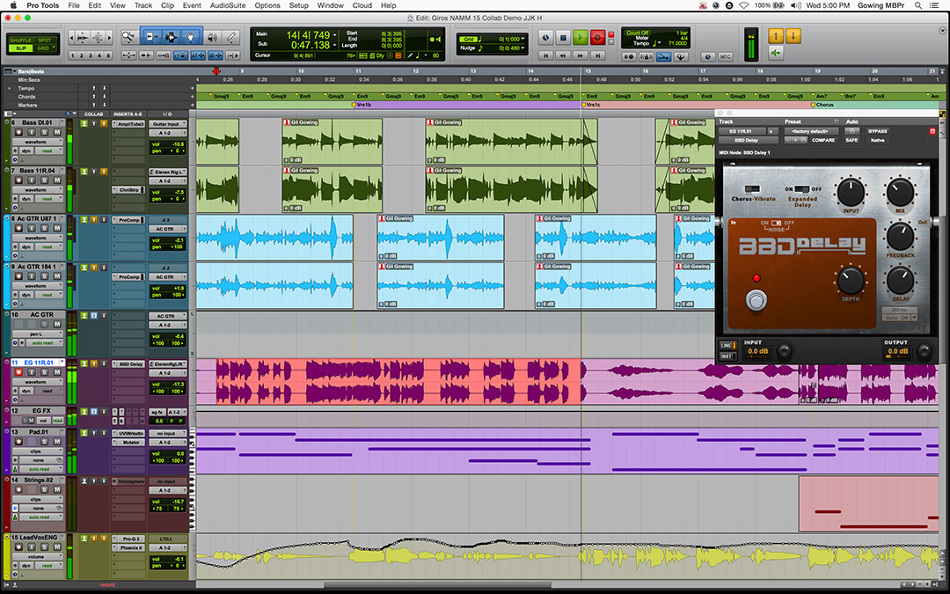 Where Ableton is the king of electronic music, Pro Tools owns the world in which recording and editing music is key. Its simplicity in these two areas are incredible, that is, once you get past the overwhelming amount of options for chopping, moving, dipping and dropping your audio. This DAW’s ability to make precision edits inside the DAW are unmatched and this is largely because of the grid and counter options available to the user. The grid view in Pro Tools shows musical subdivision just like the other any other DAW, however, where other DAWs only allow you to zoom in and see further subdivisions, Pro Tools allows you to set gridlines based on bars, beats, minute second time or samples that are always visible. These grid modes allow ease of dictation when it comes to determining how your tools will respond and this makes it incredibly easy to make grid-based moves or to pin-point extremely specific locations between the lines and edit these. This is incredibly helpful when replacing samples or creating comp tracks especially. Some other great features of Pro Tools include grouped plugins (inserting a plugin simply via a dropdown menu. Plugins are then visible under their own category, e.g. EQ, Dynamics, etc.), group edits, hiding of tracks, dedicated mixer view and autosave, as well as various other unique capabilities and features when recording, editing and mixing.

Despite Pro Tools being the best (in my own opinion) at recording, editing and mixing music, it still has a long way to go in terms of electronic production capabilities. For example, where other DAWs allow the use of a computer MIDI keyboard, Pro Tools does not have this functionality as of yet. The visibility of the grid that makes Pro Tools such a great DAW is somewhat lacking and can be sometimes lost behind tracks, especially when lots of stuff is going on all at once. Something somewhat insignificant, however, something that is also not available in Pro Tools is the changing of its skin. I prefer to work in a darker looking DAW, however Pro Tools layout is very grey and light in colour.

Overall, the DAW that you use is very much determined by your needs and wants. I really like a lot of Ableton’s functionality and will most likely continue to use it for electronic production. However, Pro Tools will continue to be my go to when I’m recording, editing and mixing instruments. What I’m saying is, use what’s best for you, get comfortable with it and smash it!